In 1948, CRISTA founder Mike Martin prayed for a youth home just outside the abandoned Firland Tuberculosis Sanatorium in Shoreline, Washington. He had no idea he was helping to plant a seed that would grow into the family of ministries we have today. He was simply looking for a place to house and feed the teens he’d met through his ministry with youth.

Although the King County Commissioners responsible for the sanatorium’s fate initially rejected Martin’s application to lease the space, he was persistent. Eventually, the commissioners granted Martin the 56-acre campus for $1.00 a year, with one condition: he must also begin a much-needed retirement community on the campus. As Martin began working to repair the sanatorium with the help of his wife and children, over 70 families who shared his vision to serve showed up to help.

Just one year later the sanatorium became King’s Garden and opened as a home to youth in dormitories and approximately 80 elderly residents. Soon, King’s Schools was formed to meet the youth’s educational needs with a Christ-centered school. The school celebrated its first graduating class in 1951. During summers, King’s Garden remained vibrant with on-campus summer camps, before Miracle Ranch, the first of two camps, became host for the summer program’s expanding needs.

Meanwhile, the growing community at King’s Garden shared its stories and faith through a 15-minute radio program on a local station. When the station eventually cancelled the program, Martin wasn’t deterred. Sensing God’s direction, he started his own station, and KGDN went on-air in 1954. The radio ministry branched naturally over time into our current stations and online presence.

King’s Garden became CRISTA in 1979 (an identity inspired by the concept of putting Christianity in action) and maintained a focus on serving the poor; hosting annual missionary conferences and welcoming missionaries during their furloughs. On December 1, 1970, World Concern, previously “Medicine for Missions,” joined the ministry family as the first of our two international relief organizations.

Through the years, as new rings have been added to our family, CRISTA has retained the mission of loving God while serving people through education, international relief and development, senior care, and media. 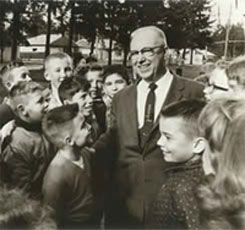