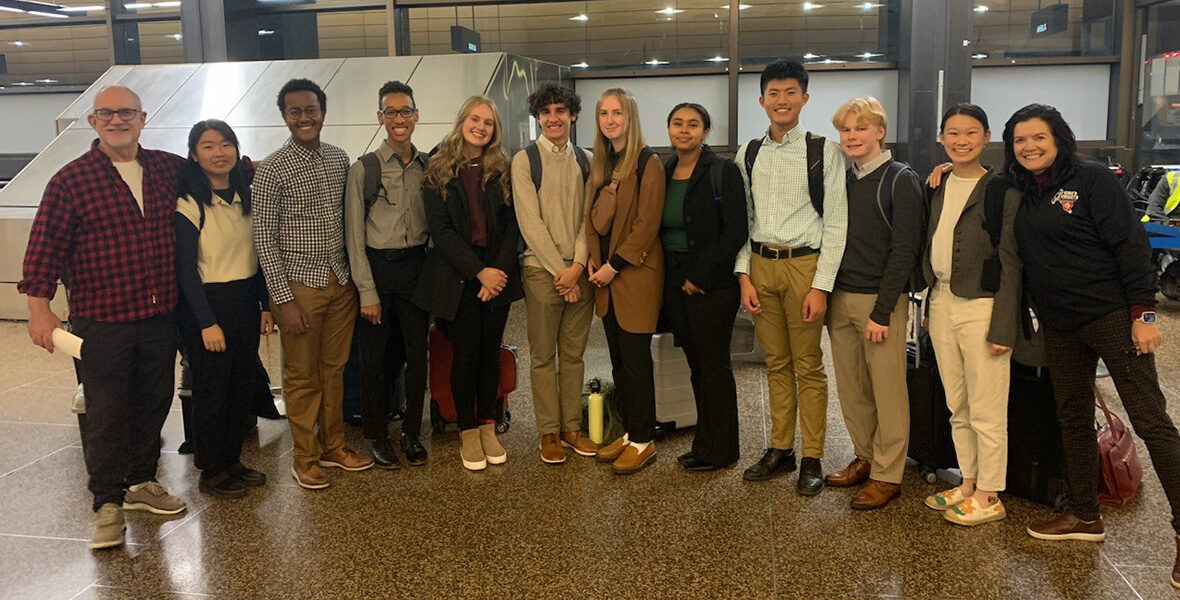 King’s Knights Mock Trial Team competed against 32 teams from across the United States and Canada recently at the Windy City, Chicago Empire Mock Trial Competition. Ten of our students traveled to Chicago to compete in four rounds, bringing home the coveted “Spirit of Empire” award. This award is voted on by students at the tournament as they select the school that best represents civility, sportsmanship, compassion, and capable citizenry. What an honor for our team to be selected!

Empire’s mission is to “Educate, Connect, and Empower.”

After two years and five competitions in cyberspace during COVID, the “Windy City Landing” saw teams from across the country come together in person for, what was for many, their first time at an in-person mock trial competition in nearly two years.

From the splendid confines of the Hilton Chicago overlooking Lake Michigan, Empire opened its doors in a new venue for the first time since 2015. Teams who came to Empire were treated to an authentic Chicago experience, from the famous deep-dish pizza to the Italian Beef, and staying only a short walk from Chicago’s Millennium Park. Competitors and staff alike were treated to a weekend of iconic Chicago sights and flavors.

Empire Mock Trial is an education nonprofit that started as a father-son project in 2007. Six years before its founding, Justin Matarrese saw a flyer at his New York City public high school, Tottenville High School, calling for students interested in “debate, acting or the law to attend a mock trial team meeting.” Intrigued, he stopped by room C313 to find out more.

With the help of his father, Gregory Matarrese, Justin started the “THS Mock Trial Association” to fundraise for Tottenville and to organize a new mock trial competition. Naming it the “Empire City Invitational,” he hoped to give students from his alma mater and across the United States the opportunity to participate in a challenging extra-curricular program.

The competition was modeled after a college mock trial invitational, offering students the benefits and fun of a mock trial, without the pressure of competition. Every team would participate in four mock trials without the possibility of being eliminated. What’s more, this program would actively encourage students to interact and treat one another with respect inside and outside of the courtroom.

The inaugural event was a success. It brought together 11 high schools from six states and crowned a New Mexico public school as its first champion. The following year, it expanded in size and reach, welcoming international schools.

Find out more about Empire Mock Trial at empiremocktrial.org