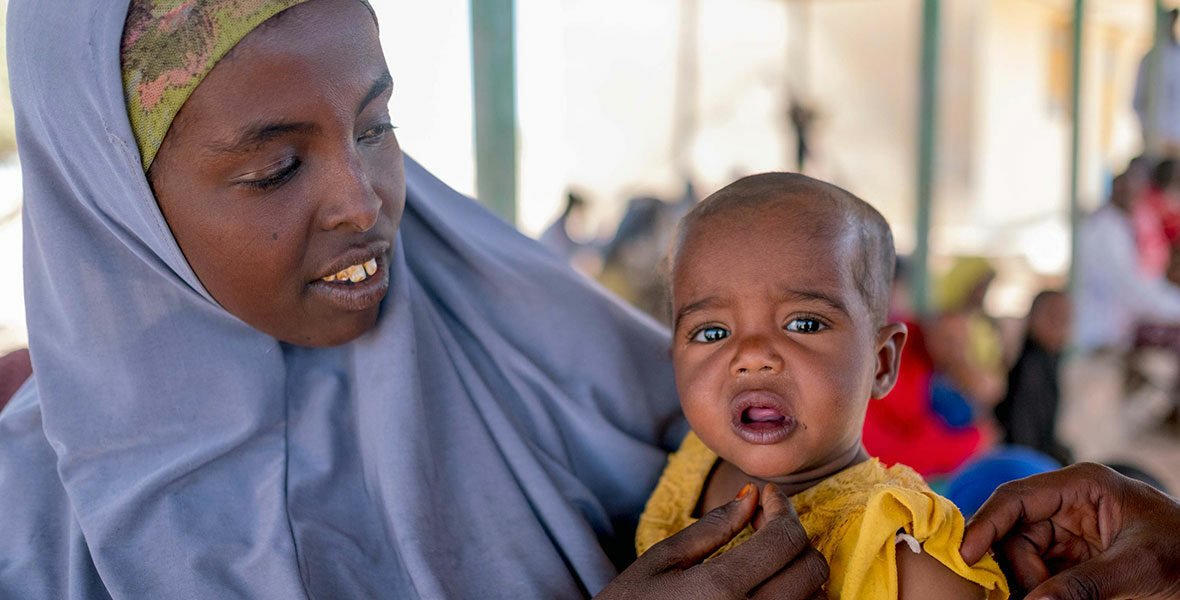 The Horn of Africa is suffering its worst drought in over 40 years and facing the threat of famine. Across the region, 19.4 million people are affected by the drought. More than 7.1 million children are acutely malnourished, including about 2 million who are severely acutely malnourished, according to UNICEF. More than 11.6 million people cannot access enough safe water. Two countries where World Concern is present and has active programs, Somalia and Kenya, are directly impacted by the extreme drought conditions and need persistent prayer and immediate intervention to avoid catastrophic loss of life.

Watch an interview with Peter Matua, World Concern’s Somalia country representative, and learn more about the extreme needs in the Horn of Africa.

Ninety percent of the water sources across Somalia have dried up. Nearly half the entire population, 7.8 million people, require humanitarian assistance, and 918,000 people have left their homes in search of food and water.

According to World Concern staff both in Somaliland and the Lower Juba region of Somalia, the humanitarian crisis continues to deteriorate by the day.

“The impact of the drought and increasing economic pressures are deepening the severity of needs and driving the country to the brink of famine. Water reservoirs have dried up – even the ones that serve as reserves for the dry period are all dry,” said Peter Mutua, World Concern’s Somalia country representative. “I have met severely malnourished children of families who are fleeing to cities, whose parents are now forced to beg for the daily food and water they need to survive.”

The Famine Early Warning Systems Network (FEWS NET) estimates that 4-5 million people in Kenya need humanitarian food assistance. Currently, the drought situation in Samburu, where World Concern is working, is at the alarm phase, with the situation still deteriorating.

“People are missing meals, parents are going without food for the sake of their children, and families are struggling to find enough water to keep their livestock alive,” explained Faith Nasieku, World Concern nutrition specialist in Samburu, Kenya. “Pastureland and water points are drying up across the region. Crop failure is occurring with 90% of those who had planted in the month of March not having harvested anything. Churches have now become home to starving people, early marriages have increased, school drop-out rates are increasing – all as a result of drought. People are witnessing the death of their livestock and the loss of their livelihoods, where 70% of livestock have died, especially cows. Prices of livestock has reduced by 75% whereby a cow that used to go for USD $30 is now sold at a throw away price of USD $8-9.”

Abdinasir Derow Hassan, 28, and his pregnant wife and two children, were forced to flee their home in Jilib in the Lower Juba region of Somalia. The drought has destroyed all their crops and insecurity in the region prevented food aid from reaching them. They were headed on foot to a camp for displaced families when their youngest son, Ahmed, died of starvation.

“My little boy was too weak to finish the journey here with us,” said a grieving Abdinasir. “I had to bury him along the way…”

Abdinasir arrived at the camp with his wife and their 4-year-old daughter. A carpenter by trade, he wakes up every morning and walks to Dhobley Town to look for work.

“Sometimes I get a job to repair a door or a fence but mostly there are no jobs in this town,” says Abdinasir. “The situation is not promising as my wife is expecting a newborn baby and I have no money or income to sustain us.”

Abdinasir is one of hundreds of people in the Lower Juba region to have received assistance from World Concern, including emergency food vouchers to feed his family, water, hygiene kits, and 4 goats to begin to rebuild his herd.

World Concern is addressing the impacts of extreme drought and meeting the needs of people through ongoing programming in Somalia and Kenya.

World Concern has been implementing an emergency response project in the southern part of Somalia in recent months, providing food and emergency supplies to families in greatest need, water to areas without access to water, hygiene kits, seeds, tools, and assistance with planting crops, as well as animal restocking to help families rebuild lost herds.

“There is a huge and growing need of the affected population in the targeted areas compared to the project’s target caseload,” said World Concern Somalia Program Manager, Peter Mutua.

In the northern region (Somaliland), World Concern has been working to prepare communities for a crisis like this for years, training farmers to plant and grow drought-resistant crops and utilize irrigation methods to sustain farms.

Emergency nutrition is being given to young children and pregnant and nursing mothers. These peanut-based nutritional supplement packets are packed with protein, vitamins, minerals, and healthy fats vulnerable children and moms need to survive.

In Samburu, Kenya, water collection systems were constructed over the past year which are proving to be lifesaving as families can access water within walking distance of their homes. An additional rock water catchment system is being constructed, which will hold 150,000 liters of water. However, without rain, these tanks will soon be empty.

Women have been trained to cultivate kitchen gardens, which include rapidly maturing sweet potatoes, and are continuing to thrive, despite the drought conditions. Children are being monitored and assessed for malnutrition and nutritional supplements are given when needed.

Learn more about World Concern’s work in the Horn of Africa HERE.